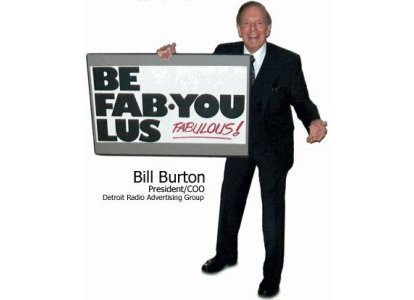 Fabulous Turn Out for Bill Burton

An overflow crowd of over 130 of some of the best people in Detroit’s radio and advertising community, and several from New York, Chicago and elsewhere, came together to honor the biggest cheerleader radio ever had in the Motor City, Bill Burton.  It was held Thursday September 10th at the Grosse Pointe Yacht Club.  Bill spent most of his career with rep firms Eastman and Katz, and headed up the Detroit Radio Advertising Group.  He died five days before Christmas in 2014, but it was somewhat lost over the Holiday Season.  Now, nine months later he finally got his overdue tribute.  Organized by Mike Koehler, National Sales Manager for Bell Media, Windsor/Detroit, the three hour event was a complete success.  A number of Bill’s friends spoke and a special brief video tribute to Burton was produced by “Radio’s Best Friend” Art Vuolo.  You can see it on YouTube.  Here is the link:
Remembering Bill Burton